A vintage car and the veteran behind the wheel

Lincoln, Nebraska (October 18, 2019) — Sam Aughe is from Crete, Nebraska, bu has been all over the United States in his everyday car, though, his travels are nothing of the ordinary.

This vehicle has seen 73 thousand miles, and has shared over 32 hundred smiles.

It is not yet done with its life journey. 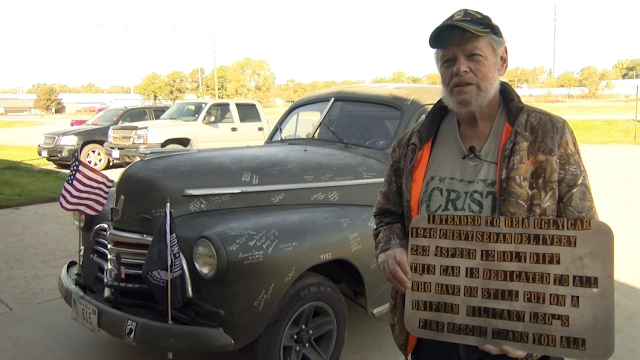 It is a patriotic testament to those who have lived and died and have served their country as they see it.

"Say, the car isn't about me, it's about what it stands for," Owner and Vietnam Veteran, Sam Aughe said. "There's names inside and outside."

The vehicle has gone all over the states, and with it, collected over 32 hundred plus signatures and names of servicememers- most of those from the military, and some of those from Police and Fire departments.

All of the names came with a story to tell.

"Some of the stories, i wish i could remember them all, are heartbreaking. I had a girl sign it a couple years ago. Her brother introduced her to the guy she married. They were both killed by the same IED in Iraq. When she signed it, the bodies were not back yet," Aughe said.

"We end up getting a lot of hugs. They're either 6ft 10in, all dressed up in leather sweaty bikers, or sweet old women just crying. It brings people closure," Aughe's grandson and successor to the vehicle, John Parks said.

The first name on it is Sam's friend he lost in the Vietnam war.

"If I could sleep, this would never happen, but it just came to me in the middle of the night. I can tell you the first name that was on it, and that's Bob Rose, killed in action December 24th, 1969," Aughe said.

The last name will remain a mystery.


Aughe says this project is an extension of his personal journey, and will be passing the car and its responsibility on to his grandson when Sam can no longer drive.

He said he doesn't want it to be pretty, but just a simple reminder of those who risked their lives to serve their country.

If you're interested in inviting the vehicle to a memorial service, you can contact Sam Aughe at 402-418-8329.